From January - June, 2021 a team of refugees and members from ASB Greece are going through a remote participatory video intervention. The main aim of the intervention is to listen to the voices of refugees in two refugee settlements in the North of Greece and to better understand their life situation on what is currently important in their lifes. The process is guided remotely by Ralf Otto and Simon Koolwijk.

During the first phase of the project participants have strengthened their video making skills, including research, story development, filming and editing. By the end of February, 2021 each team per settlement finalised a life story of a refugee. Currenly the teams are now in the second phase working on a participatory documentary, which will be completed by the end of June, 2021.

From 12 - 16 April, 2021 four participants working with NGOs or private companies, participated in the training Remote Participatory Video. The 5-day online training was conducted 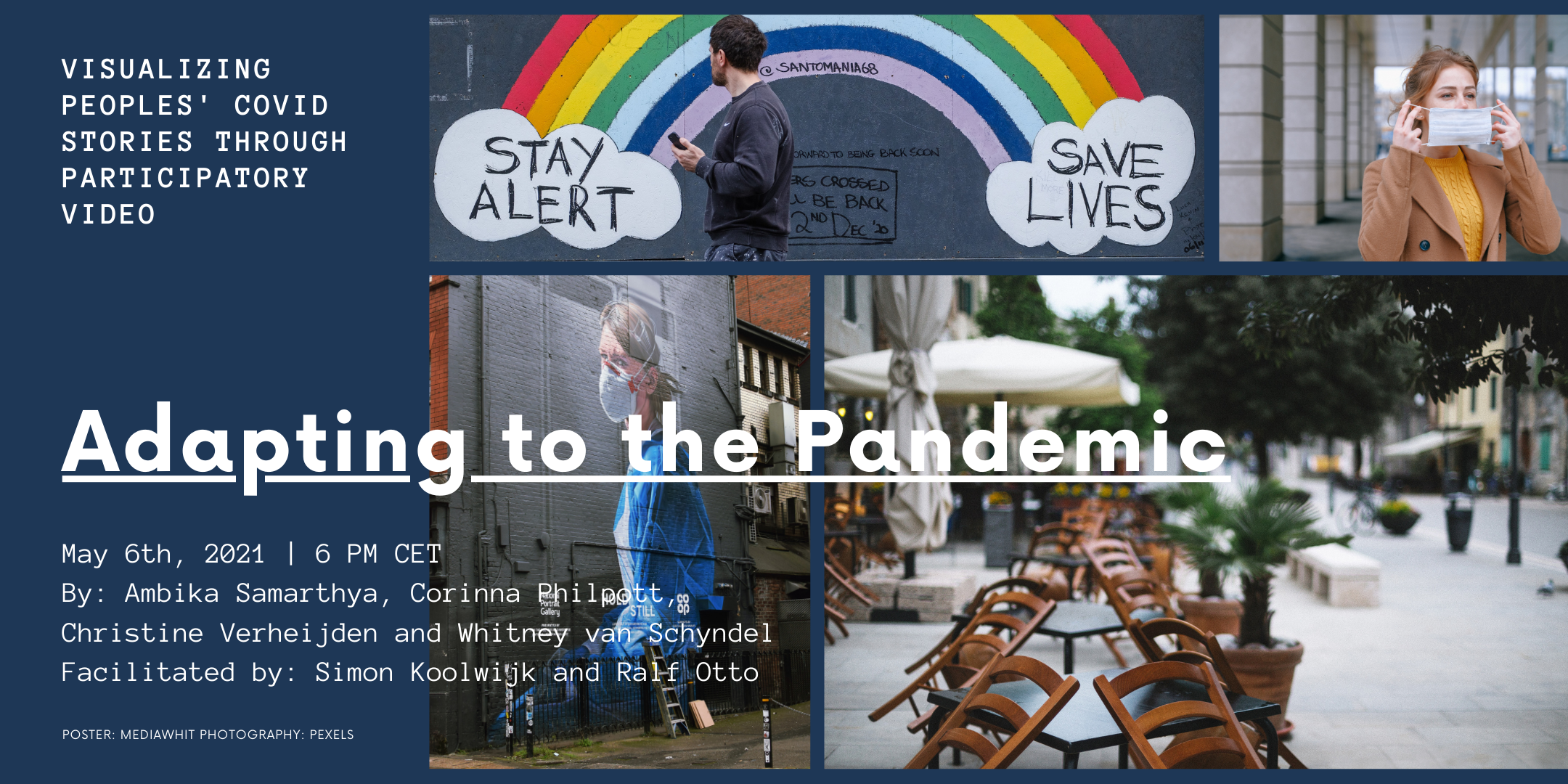 by Ralf Otto and Simon Koolwijk. As completion of the course, on the 6th May, 2021,  the 12-minute participatory video 'Adapting to the Pandemic' was shown and shared with an audience of 30 participants coming from the organisations, where the participants were working. During the 2-hour online session the benefits, learnings and possibilities were shared amongst the participants.

In March, 2021 I facilitated and guided the online exposition of Zozan Hamo's Road to Hope. Zozan is a mother who had to flee the war in Syria and brought her children to safety. She made a number of beautiful and impressive painting of her journey. I also assisted in the editing of the short 4 minute video showing parts of the online exposition, Zozan's story and the dialogue.

Vibrations - Kino Terragonik
In February, 2021, I online produced the film 'Vibrations' with a team of actors and filmmakers coming from Spain and Switzerland. For a period of one week, we worked jointly online. Shooting took place in two local studios in Catalonia, Spain. This film shows 6 emotions/ state of minds of people going from distrust and anger towards the state of healing and love. The story is beautifully reflected by 5 actors. 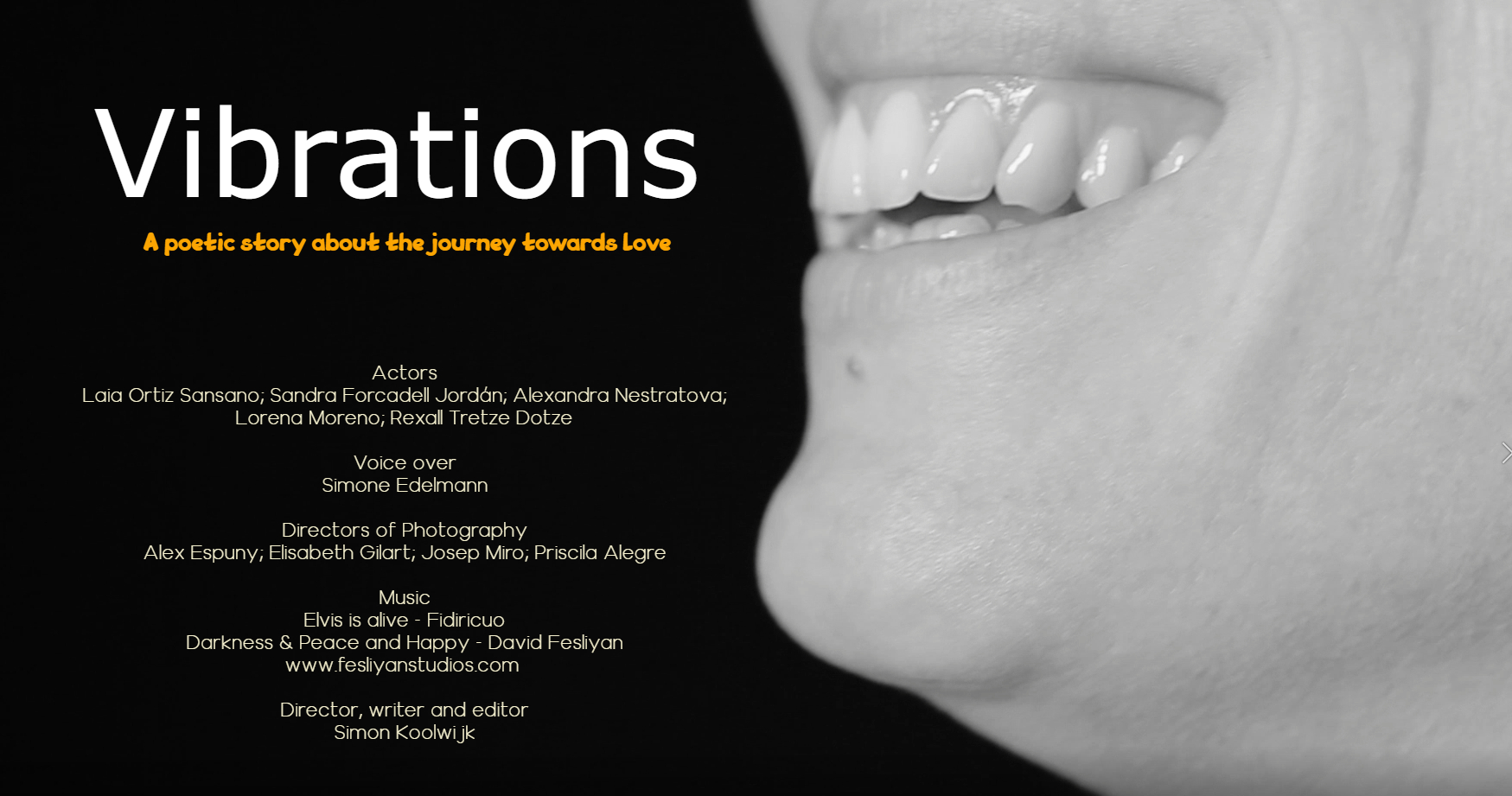 Participatory video and the win-win of diversity and inclusion - January, 2019

At the event 'Being Human in Agile Times' organised by Capgemini - Agile on the Fly on the 21st January, 2019 Saskia Ivens and I conducted a workshop about the Win-Win of Diversity and Inclusivity in an agile working context. With a group of 10 participants we discussed 'Change Management issues - challenges, opportunities and solutions - for gender, diversity and inclusivity by using participatory video. We had some very interesting eye openers about the added value of working in diverse and inclusive teams.

Video for monitoring and evaluation

Promuje Lodzkie, one of the project partners in the BIOGOV project which promotes bio-diversity in 8 European countries, produced in October 2018 a video of their first regional stakeholder group meeting. The participants had a chance to share their opinion on their role and possible contribution to the BIOGOV project as well as their diverse perspectives on regional biodiversity. During the meeting participants used techniques proposed by European project leader. First one called “Rich Picture” – which is some kind of picture, some kind of poster. This method involves stakeholders working together to draw a picture with their input on the project. During the meeting participants proposed to promote traditional fruit en horticultural practices, since this increases bio-diversity in the ecological system.  Watch the video;
Project staff from the Promuje Lodzkie and BIOGOV partner were trained in participatory video by Facili2transform in July, 2018 and this is one of their first video productions enabling to visualize the multi-stakeholder process contributing to improved biodiversity in the region.

On the 26th November, 2018 I facilitated a workshop about Talent and Talent development for a big engineers firm. During the workshop the diversity of talent was linked to job function development and arising work opportunities.

On the 13th November, 2018 I facilitated the Kick off of a strategic planning process with an international organisation working on environment and bio diversity. In this facilitation I worked with Sinek's Golden Circle to create consensus for its mission statement and unique added value.

Videomaking for monitoring and evaluation – 25th and 26th October, 2018

Participatory video as baseline assessment for biodiversity in Europe

From 2 – 6 July, 2018  a participatory video intervention was conducted for the BIOGOV - Interreg Europe project. The PV intervention was a baseline assessment about the decline of the meadow bird population in Fryslan and on how to take measures to stop the decline and improve the biodiversity. Professionals in communication and  nature conservation experts interviewed  stakeholders on biodiversity in the Province of Fryslan, The Netherlands.

This pv trajectory is part of a project that takes place in 8 European countries, aiming to improve the biodiversity by bringing stakeholders together to work on sustainable nature conservation. Participatory video focuses on increasing awareness, supporting the learning process and  making the problem, the change and the actors involved in the process visible.

Storytelling by film at Hamburger Kino

You can tell fantatistic stories with poetry, film and dance in one movie. Angels of Hamburg is such a production which I produced with Solomia Kushnir, Javid Ananda Wunsch and Sam Twyman at Hamburger Kino which was held from 25 May - 2 June, 2018. Watch the 3 minute dance, Angels of Hamburg

Angels of Hamburg from Simon Koolwijk on Vimeo.

Making films at Kino Budapest
From 19 – 28 April, 2018 I participated at Kino Budapest. There I directed the production of the film ‘Cat Hunting’.  The story deals about an Animal lobbyist/ activist who turns into an animal criminal, when a cat slips unexpectedly into his house,  just before he goes to the airport.

From 13 – 26 January, 2018 I participated in the Kino Kabaret in Geneva, Switzerland. The Kino Kabaret is a movement where filmmakers, actors/ comedians, camera and sound operators, musicians, décor makers  and make over specialists come together to jointly make short films. I had the opportunity to work on 2 four minute films and 2 short one minute films.  On the final day I produced with Robin Derek and Olivier Guibert a short film for the campaign ‘Dit non a no billag’.  This campaign discusses if the Swiss population should vote ‘Yes’ or ‘No’ in the upcoming referendum in early March for continuing or stopping the fee Swiss people monthly pay for the public television and the cultural sector.  Part of this fee is paid to support the Swiss cultural sector and upcoming artists to make films, theatre production and have local documentaries made.  The ‘Yes’ voters are most coming from the extreme right wing parties, Bankers and populists.  The ‘No’ voters are most represented by the cultural sector.  This short one minute movie is a parodie on how some powerful forces might influence the referendum.  Watch;

Producing and sharing a video story in one day as part of the teambuilding process!

On the 13th June,  2017 the team of EEAS came together to address 3 key issues in the team by producing and sharing video stories for discussion. The day was facilitated by Jeffer London and Simon Koolwijk, who guided the team to produce 3 short films of 2 minutes each. Participants got acquainted with the basic principles of filmmaking, developed their scripts, filmed, prepared announcement posters and edited it to a final product.  The process created fun and helped to discover hidden talents and to know each other on a different way. Download the flyer of this one-day workshop 'Filming our team story'. 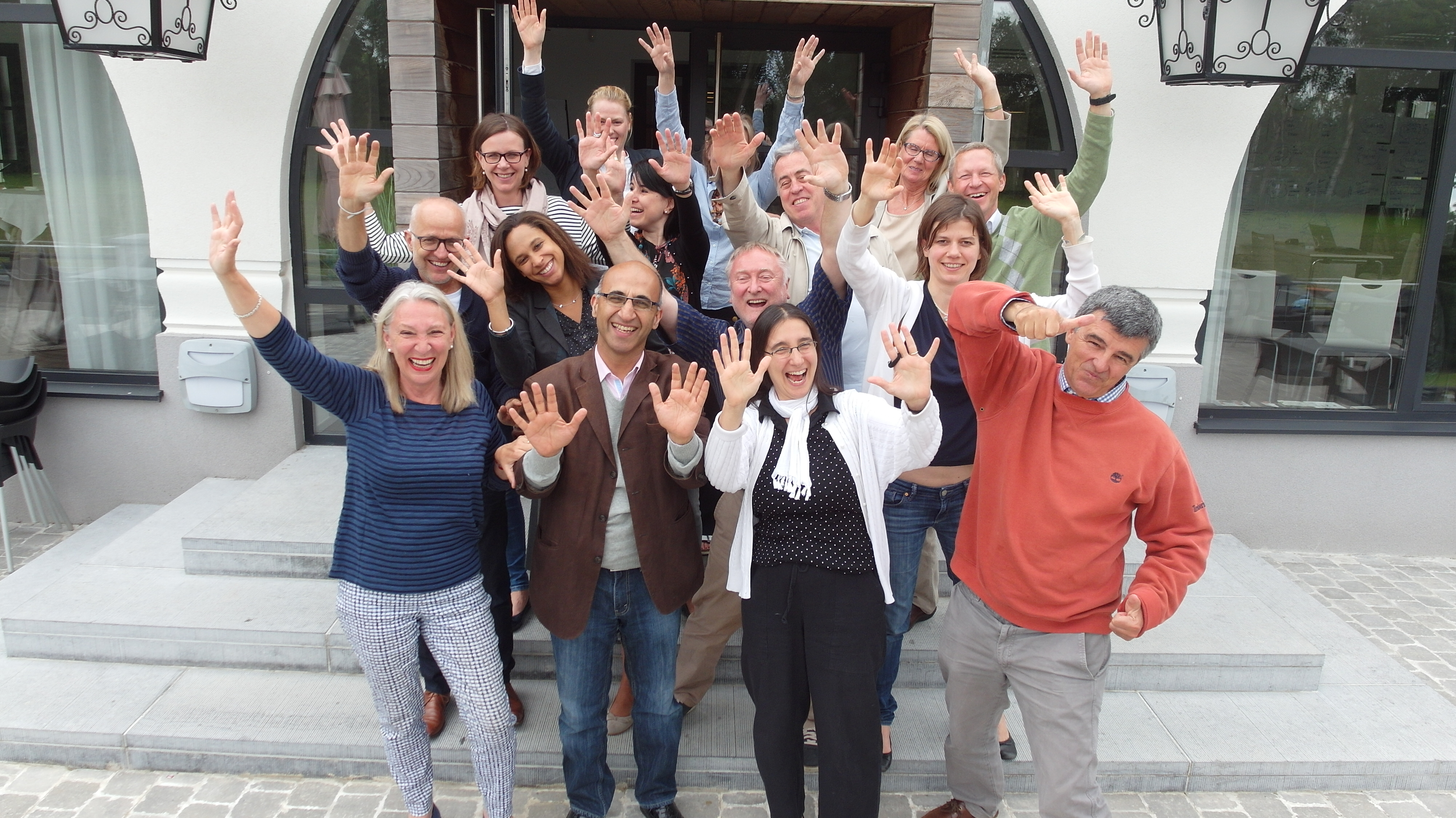 Winners Participatory video Awards Ethiopian Social Accountability Program
In March, 2017 the Ethiopian Social Accountability Program organized the finals of the participatory video (PV)  award competition for organisations who applied PV for social accountability purposes in 2016. The participatory video interventions were applied to evaluate the progress and the sustainability of the social accountability process. This process enabled stakeholders to share their successes and build their confidence in the implementation of this process. The competition was won by LIA in the Intermediate category and YMCD in the A category.  The most creative video was produced by pv intervention of the the Guraghe Development Association.  All organisations were trained and guided between 2013 and 2015 by Facili2transform to obtain the skills in participatory video.  It was already the third time, the ESAP2 organised this competition since the trainings started in 2013. This time Facili2transform was participating as member of the jury in giving feedback for learning purposes to the participating organisations.   Watch both videos of LIA and the Guraghe Development Association.

Video report as a means for follow-up in organisational development

On the 16th March, 2017 Jeffer London and Mara Garafalo conducted an ‘Organisational Development’ Teambuilding day ‘Becoming’ for the Directorate of Sante B at the European Union in Brussels. Impressions and results from this meeting were recorded by video and compiled to a video of 8 minutes by Simon Koolwijk. This video report will be used as a means for communication for follow-up meetings in the organizational development process of the organisation. Video reports show to be more powerful in the change process, since written reports less and less read in change processes.  See the group photo of the Department of Sante B. 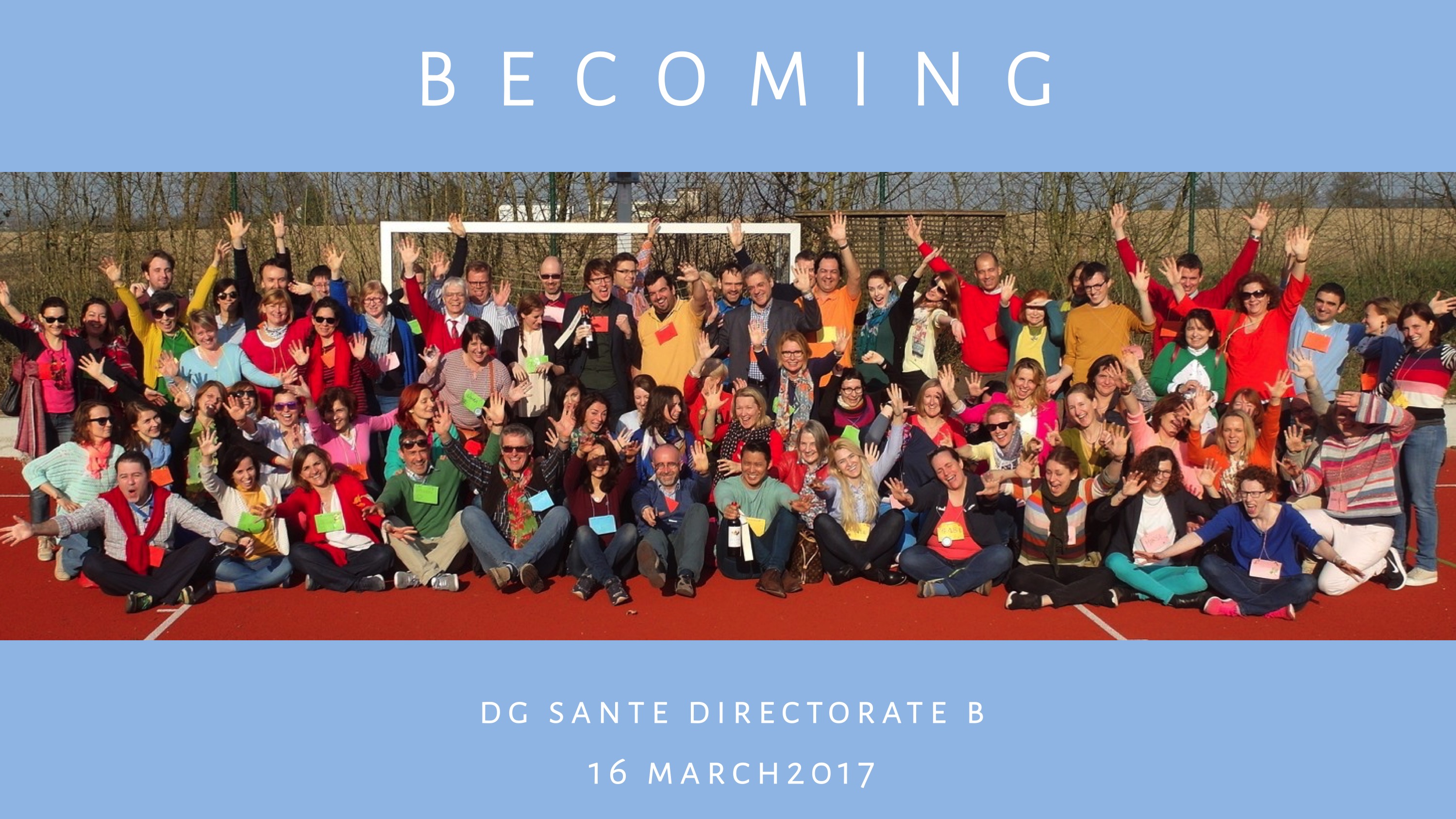 Build Bridges not Walls
On World Speech Day, 15th March, 2017  facilitators came together in Brussels to share stories about the theme ‘Build Bridges not Walls’. The event was hosted, organized and facilitated by Jeffer London having participants from the Toast Masters and the International Association of Facilitators to join the world wide initiative of World Speech Day by giving people the opportunity to have their voice heard. Simon Koolwijk was asked to record this event by video and to develop a joint story with the participants. Within 7 hours, including facilitation and editing, the video was completed. Watch the video;

Political debate at the University of Applied Sciences Utrecht – video as support for the dialogue
On the 8th March, 2017 students from the University of Applied Sciences Utrecht organized a city debate to discuss with politicians from 4 important political parties on how the government should deal with social security issues and the loan system for students. The debate was part of the election campaign for the forthcoming National elections, which take place on the 15th March, 2017 in the Netherlands.

This project was supported and guided by Marco van Stralen, lecturer and teacher at the University.  Simon Koolwijk guided the students in developing video interviews, that were used for dialogue during the debate.  The students shared personal verbal stories and video interviews from experts on social security and student issues. The debate was attended by 150 students and teachers from the college and university of applied sciences.  The personal stories and the videos contributed to a lively debate, that was led and facilitated by Jan Roelfs, who is sports commentator with the National Broadcasting company.

Kick off facilitation strategic planning process with Sinek's Golden Circle
On the 13th November, 2018 I facilitated the Kick off of a strategic planning process with an international organisation working on environment and bio diversity. In this facilitation I worked with Sinek's Golden Circle to create consensus for its mission statement and unique added value.

The empowering effect of participatory video!

I am very impressed with the empowering effect of participatory video on the community, government officials and service providers. In addition we started using video contents in our M & E system of our organization and the videos helped us to measure service improvement through implementation of Social Accountability. Tigest Tewabe, Project coordinator, JECCDO